In Doon Partha and Goles had many a private moments together.
They have gone for a walk and have decided to go in the morning as well. I have always felt that my presence has stopped the father daughter synergy as Goles and me……well we are close both me and Goles share .... now that I am out of the picture I am sure their innate goodness will come to the fore and then  they will be more close than ever (I hope) that is the case.

Mil bade me a sickly farewell today she seemed upset... hope she gets well soon. I feel bad leaving her behind alone and recovering.
Journey…..
We slept most of the way and stopped at Cheetal Grande. Where we had a plate of pakodas and  tea. Kukku had a cold drink. We had a good time. I am wearing me new jeans and am feeling grand as no one is staring at me needlessly. 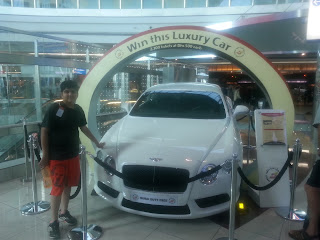 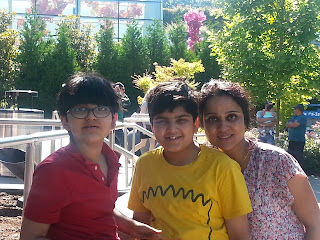 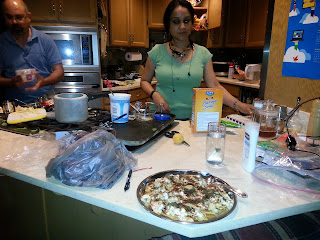 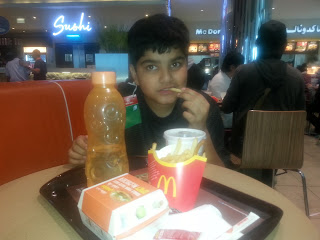 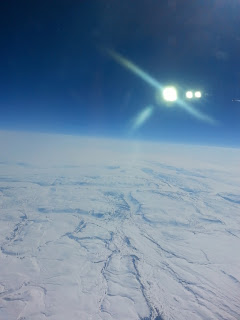 Lazy Days... Pro Sports Club....it is GRAND
I am now sitting in the pro sports club Basket ball  Arena where I am typing this mail. There are 8 courts here and it is amazing.  Generally Kukku and me try to play one vs one in basketball. I don't want to boast when I say I m good really good. . Only my fat and decreased stamina prevent me from beating Kukku high and dry. The skills I have are amazing I have even taken many shots from the 3 point circle and it is amazing what I can do. Generally after dropping Rohan for his FLB Atul drops us in the club and Tublu picks us up at 5 30 in the evening 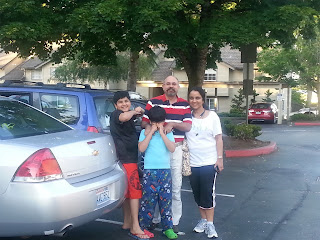 Kukku has become a fan of Tublu as is Goles..it is not surprising. ....She cooks the amazing pizza ... and gives him what he wants to eat. Kukku is asking me to be more like Tublu..... "dekho se Rohan ke koto aador kore. .. tum keno kore na..." of course she can't play b ball with him. I am skilled in many things. .... The same can't be said about Tublu who has trouble even catching a ball. Rohan sadly takes after her.... but we do have a lot of fun with our catch and catch games. 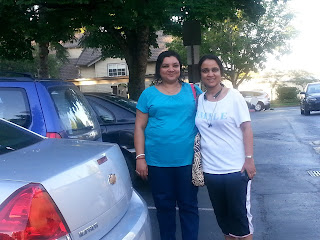 5th June
THE PARK
There are so many nice things here which one should I write about. Let me tell you about the park called Idylwood Park.
It is a beautiful park which is near a lake called Shamamish Park. There are some wild animals .... Ducks.... Rabbits... squirrels which are as big as the rabbits... they are awfully tame and once you start feeding them they come to you in hordes they also look behind you to see if there are more in the bags behind you.  They are really sweet.

We feed the ducks shamelessly but one of Tublu's Co parents ( whose son Leopold goes to the same social class  like Rohan) called Inga said that one day when she was swimming she waded out of the water with Duck guano all over her hair. She may be wrong because there are Gulls and swans here too and she does not look like a guano specialist. But Tublu is really against feeding the poor ducks who come hopefully towards us.
Day before yesterday Atul taught us a new game with 4 ball red and blue.. And beat us fair and square of course as the game needed skills as in golf. We also play catch and catch. …also Atul and Kukku catch fish and throw them back in the water.
We tell the ducks frankly that it is because of Tublu that they are hungry today. They seem to understand and walk away showing their waddling backs at Tublu specifically.
One more thing there is a road we have to cross the road we have to press a button...before we cross the road and all the vehicles stop. It is amazing because all the vehicles are coming at a speed of about 70 miles approx 110 km and stop at once. .. it is a magic button.

There is a beautiful bench and table set where  I sit and read books that I have got from the library and I am so close to the lake that if a water skier or motor boat comes my way the water splashes on my feet. A Russian fisherman also shares the same spot with me... I reached there a few minutes late and he will be there already. ... ...  we both want the bench …but you see it is a public park so we can't claim dibs on that particular spot. I want it for the peace and tranquility it offers and he wants it as it is a good space to fish... however we can't publicly ask each other to move away but I am trying to scare away the fish and he is trying to make conversation silly details about fishing which I am not so keen to hear.
When Tublu comes back from office we go to the park at about 8 30 when it is still sunny and 50 push from the swing then ring a ring a roses then home dinner and the sleep. I watch Dexter and Tublu plays office office

On Saturday  we have decided to go do Seattle downtown.  It was fun. Atul dropped is there. The weather was nice and sunny. We had a lot of places we wanted to go to. There was a pop art museum. The PIKE market the space needle and the duck rides.
We could manage only two..
1 . The Duck ride
2.The space needle
3. Lunch at McDonald's 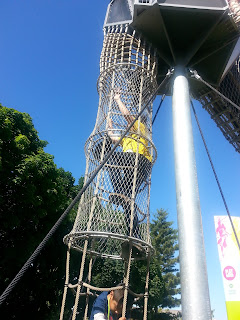 We reached there by 3:00 as we went to a mall Atul decided that he would rather have a peaceful day at his house . We did miss him but it is pain to be with Tublu alone as when they ale together as I do not want to be" kebab Mein Haddi" So I was pleased to have my sister all to myself for the day. Of course I had to compete with Kukku and Rohan . We first stood in line to get the ticket for Duck RIDE and then went to  space needle to get ticket for the ride up .It was for 9:30 PM, the duck ride was from 6:45 PM to 8:00PM. 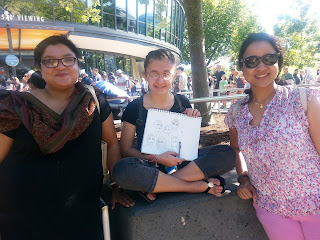 We also met a girl who was form LSR and was here with her BF (a blonde) from another state university. We were in the same lines to get the tickets.

Rohan and Kukku played on the swings 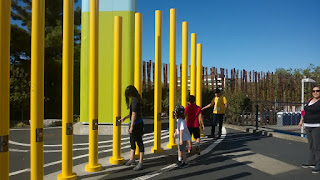 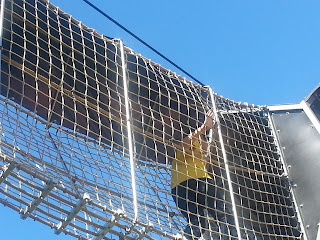 The lunch at McDonald’s was a good. Though we had carried a bag from home but when we got to the car. 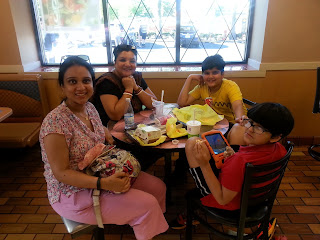 In the process of getting things from Costco we emptied the car and had no bag however we had a few goods from Costco (like more mega mall) cokes cans and wriggly chewing gum.

1. THE DUCK RIDE. It is an amphibious vehicle, which rides on roads and then gets converted to boat on the lake (Lake Union). We were in time for the duck ride. It was one of the best things I got to do this holiday. It was a conducted tour...there was a funny Captain Duck who told us of all the land marks. 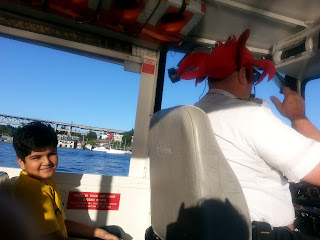 a. There is a tunnel digger called Bertha who was spoiled and had gone for repairs. It is to be a tunnel under the Lake Union. 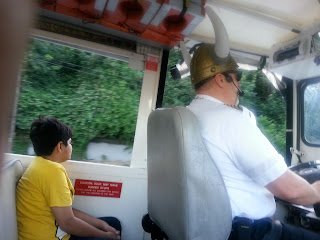 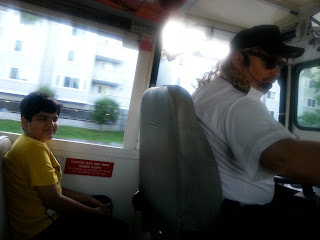 b. We also saw the pioneer market. . The 1st market in Seattle.
c. The 1st Starbucks also opened here. He made us say "Ka jing" whenever we crossed a Starbucks.  Rohan shouted star bucks.
Capt Duck made us dance with hands on Disco music.... and whoop when we crossed other bystanders. Here are a few funny caps he wore on the wassap pictures. 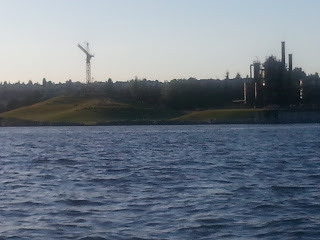 He also showed us pictures where the movie called “lonely in Seattle” was shot. We also saw a water plane take off and land. 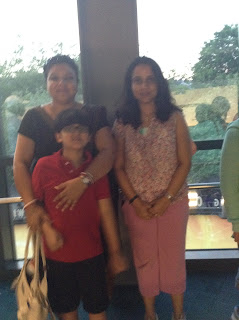 2. Space Needle :-The ride lasted about 1 hour after which we hurried to the space needle that was fun too we stood on a line there were three generation women in front of us. Kukku was told off for trying to push the lady of the younger generation and Rohan actually pushed her hard when she was moving slowly. It was so funny. He also took a wine glass and poured sprite for himself when we were not looking. Really that boy is sooooo funny. SPACE NEEDLE is a tall building and we go up on a lift. When we reached on the top there is a circle we just walk and see all parts of Seattle from a far off distance...as far as space hence the name Space needle.

Atul reached there to pick us up at about 10 and we had some time in the park when we enjoyed the swings and tall slides.  We reached home and had  grand dinner. 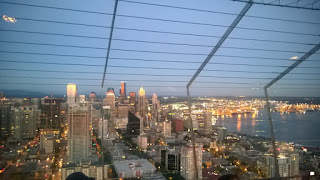