Trip to Landour and mussorie

Trip to Landour and Mussoorie

A two days break from the monotony of what life has become is never a bad idea... following the same we went for a weekend gateway to Landour and Mussorie.

We reached a hotel called The Mussorie Club. It was a beautiful place. for the past few days we had been unable to see the queen of hill stations ......we discovered the cause. .. clouds...they were surrounding is all over and floating  like fog ..here and there.

We had lunch in the hotel itself and there after we went  for a walk through Mall Road. I was in a green saree with sports shoes we walked and walked through the clouds. 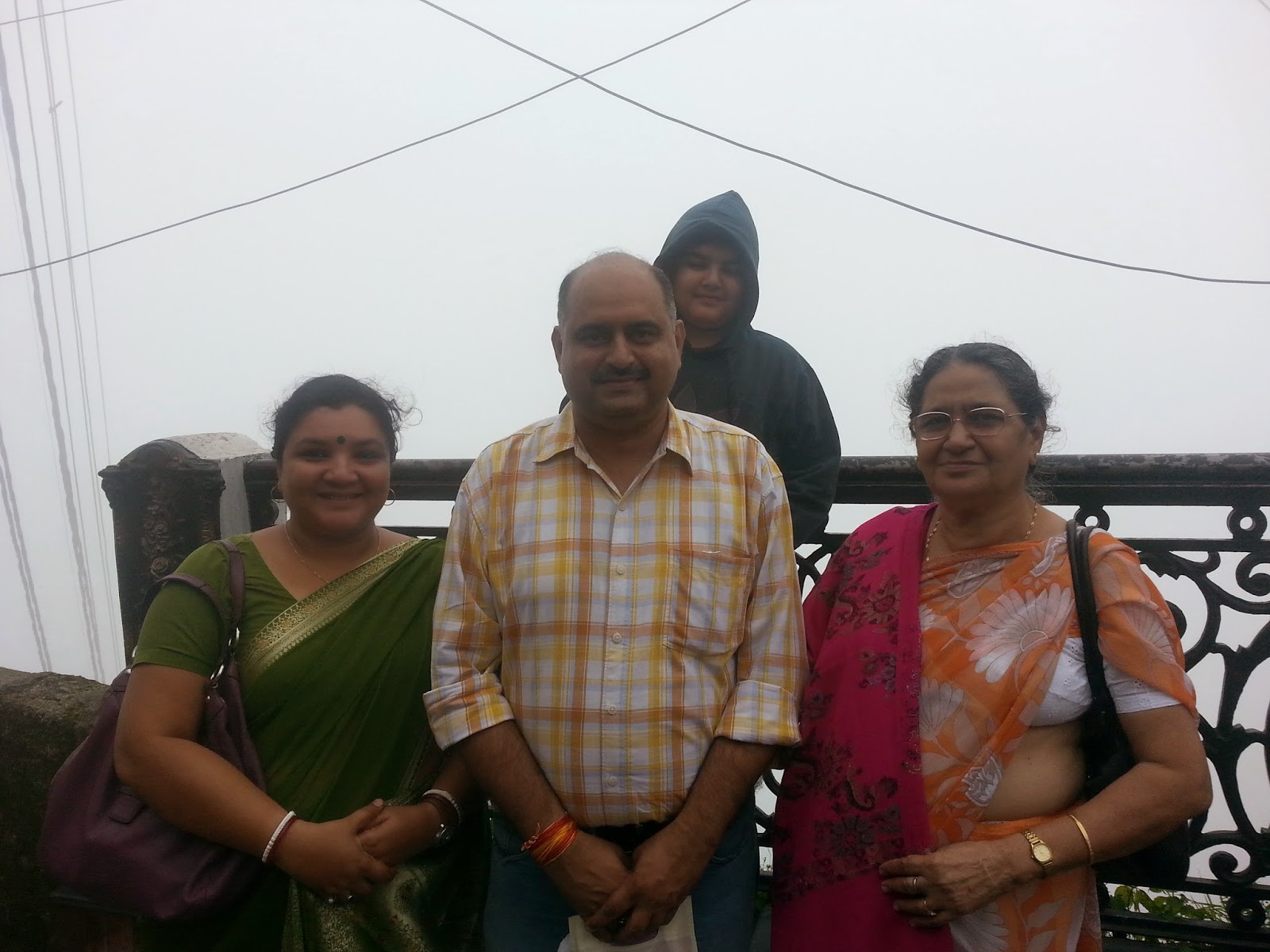 Had the place been less commercialized i could have written poetry. It gave a whole new meaning to the word floating in cloud 9. I think I floated in many clouds not just 9. Then we reached the place where we took ropeway for"Gunhill Top". That place was super commercialized.

There were
1.shoot the balloon shops,
2.shoot target with bow and arrow.
3.Ring the prize hoopla.
4. PHOTOGRAPHERS were walking around with  garland of erstwhile photographs promising to make us look great in kashmiri dressess. 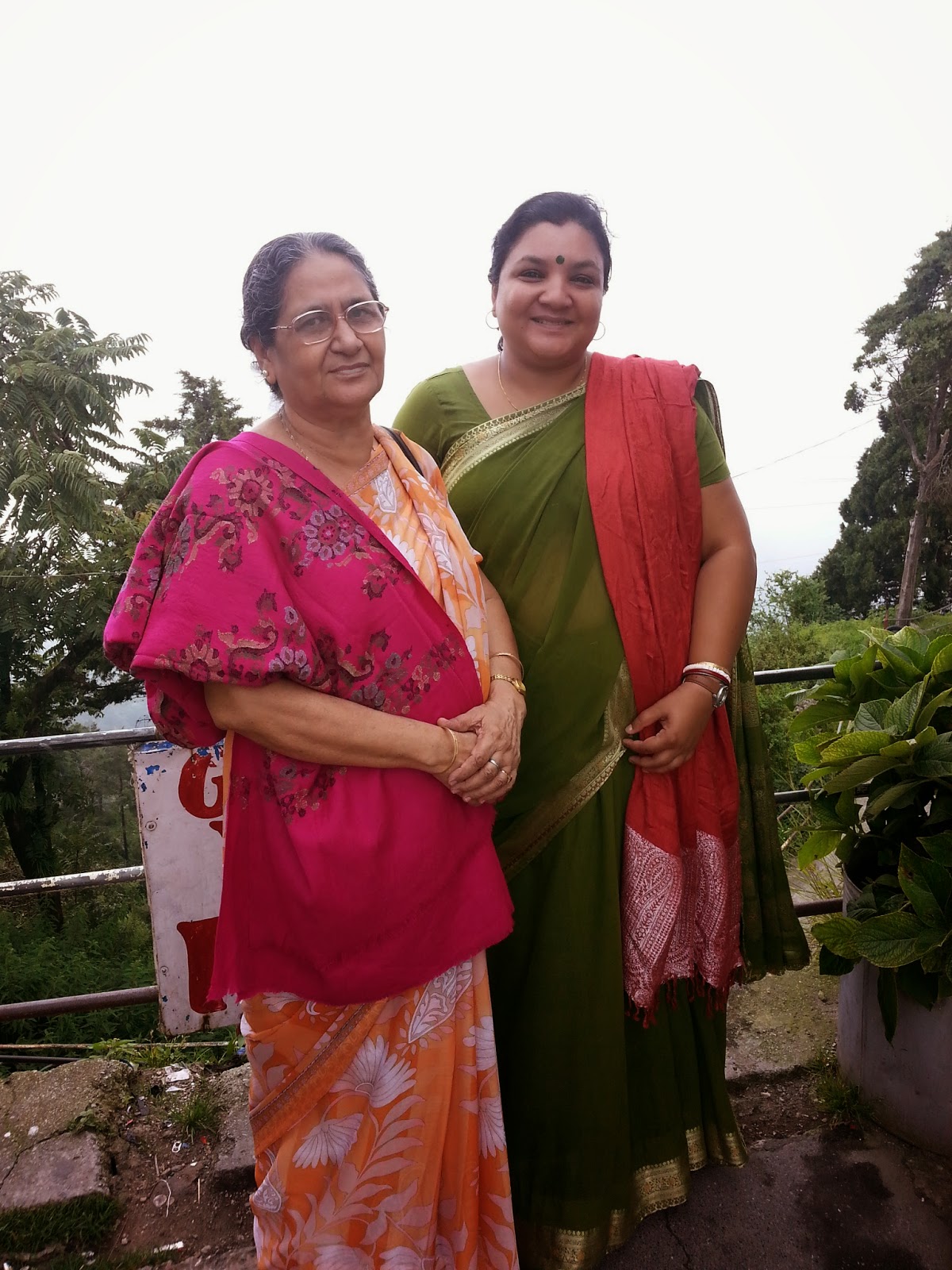 5. There were clay models of Dinosaurs. . In whose mouth we could place our head and take pictures. .. also innocent deers, peacocks and larger than the deer rabbits. We could hug them and take pics for Rs 10.

There was a sulabh sbouchalay where we could piss for 5 bucks..

all this in the serene surroundings of Gods heaven. The rope way was good but for us who are used  the ropeway of Mansa devi and Chandidevi of Haridwar it was dirty diapilated dingy and pathetic
We walked back and bought clothes from road side shops nightie for mum one hoodie jacket for Kukku. He saw a book store and we bought three books. 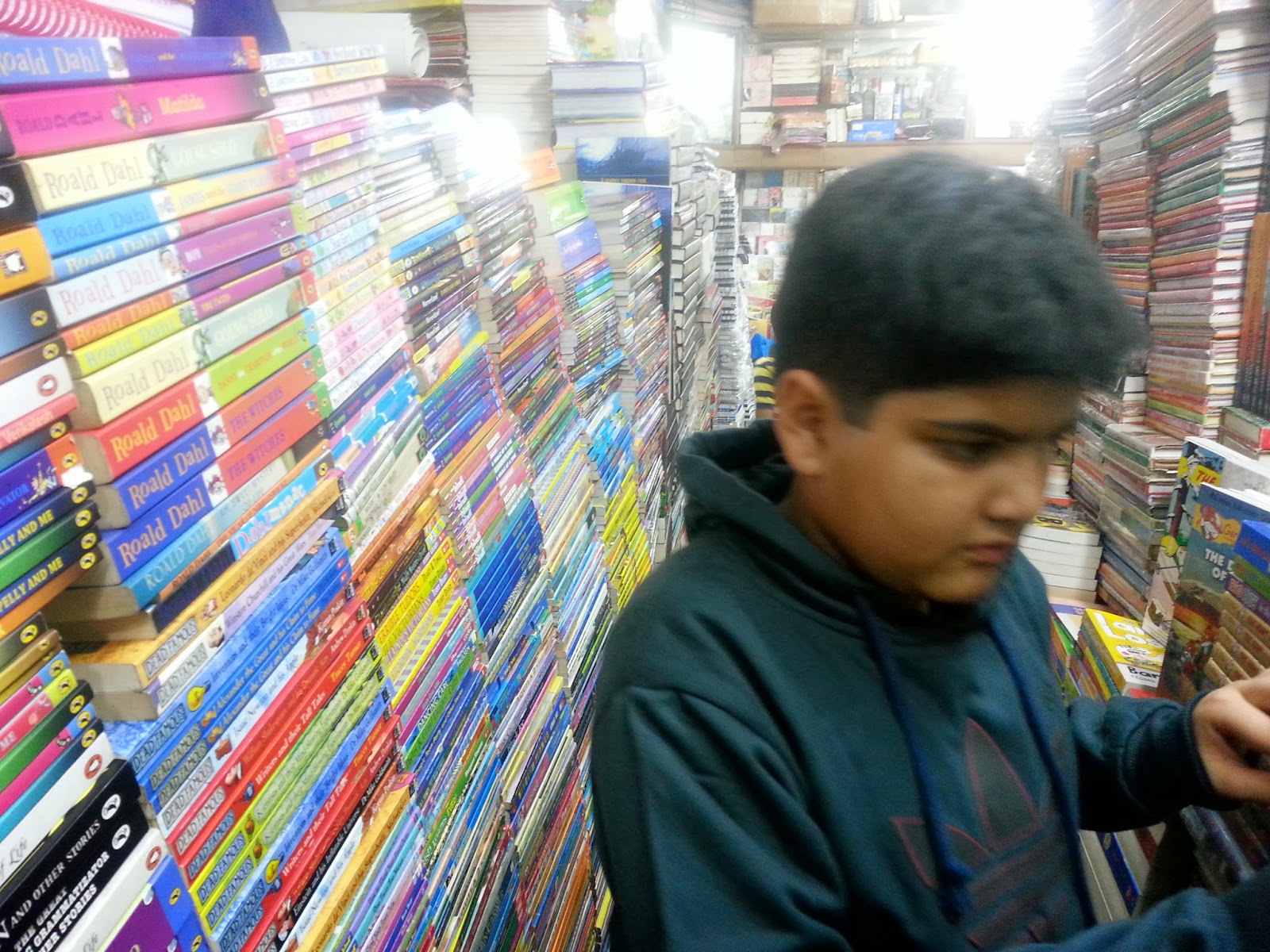 We had coffee cakes and kathi roll in a shop called Chic chocolate. Two Americans were sitting and talking to the proprietor. They were surprised at the Western dishes that shop could dole out. There were cheese cake.. peanut butter cake apple pies. They were surprised to see that they could make German Cheese.  I could see that the proprietor was a regular guy like us. He had decorated the walls of his shop with posters of Marlyn Monroe Greta Garbo Lawrence of Arabia. Plus the music being played was the golden oldies like yesterday of Beatles and others that we had in the cassette that one elder brother had given me once.  The Americans were wearing pagdi like the Sikhs.

We came back in the waft of the clouds and rested till 700.  We had planned to go to Landour but evening was cold and cloudy so we went again to Mall Road. We happened to come to a shop called Natraj Woollens. He sold us so many things. It was a great shop.  We bought :-

Now we are back after a great dinner at a place called the Tavern. There was a boy with guitar and sang songs of  ...Arijit.. who's a rage these days. 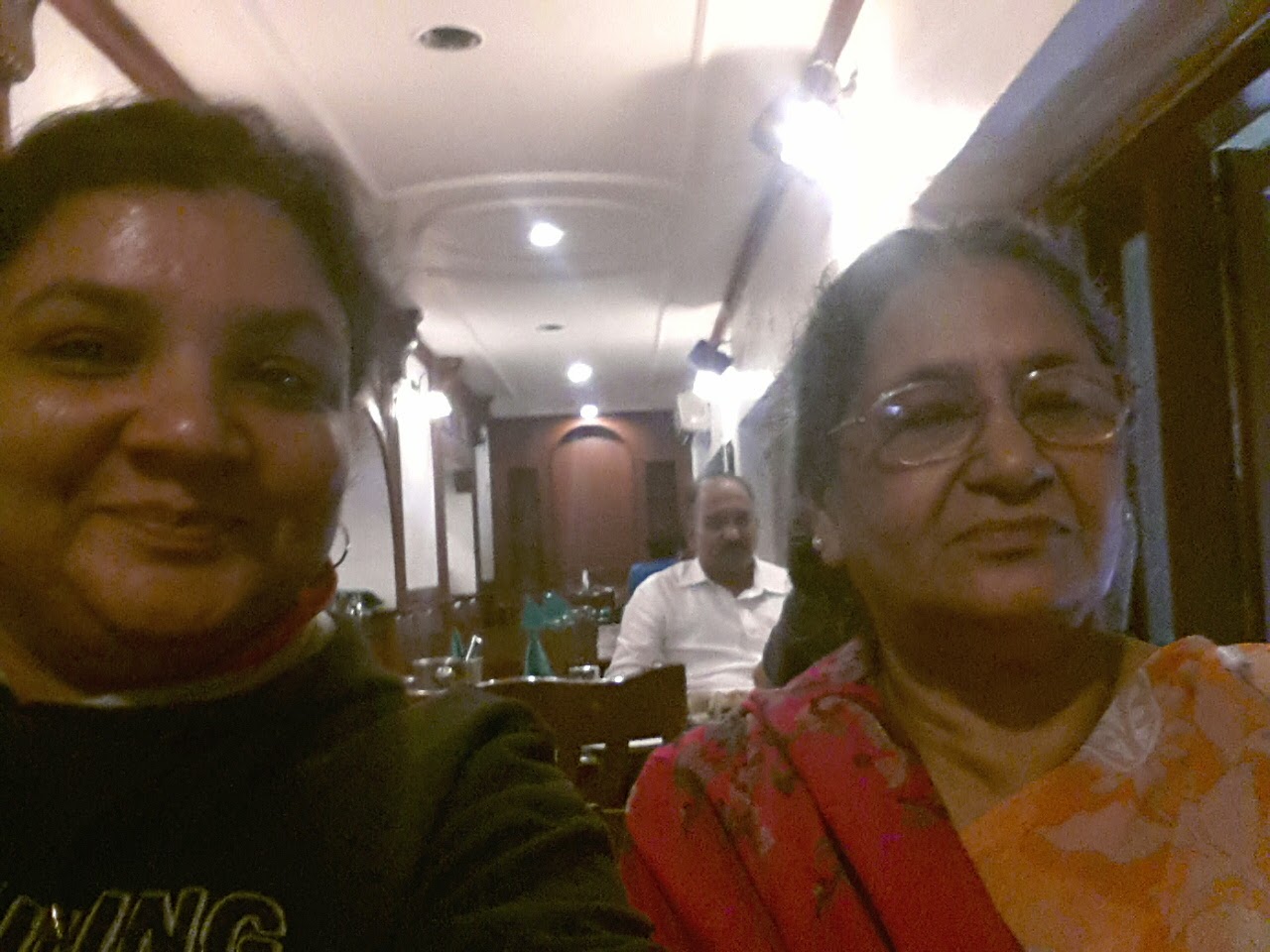 I had a ice cream and Kukku sulked because we did not order anything from the Mussoorie Dominoes.. They will never be happy

On day 2 we left the under age and over age in the hotel itself and went for a long hike... to Landour. It was a long and arduous journey. Mussorie and Landour are only 4.5 km walking but I have send the feedback saying they should consider the terrain as well. The navigator said we could reach Landour in 15 min... but it took more time we reached by 45 min.

we were in Landour market by 10 min but the climb uphill was a terrible terrible climb and made me realize how unfit I have become. 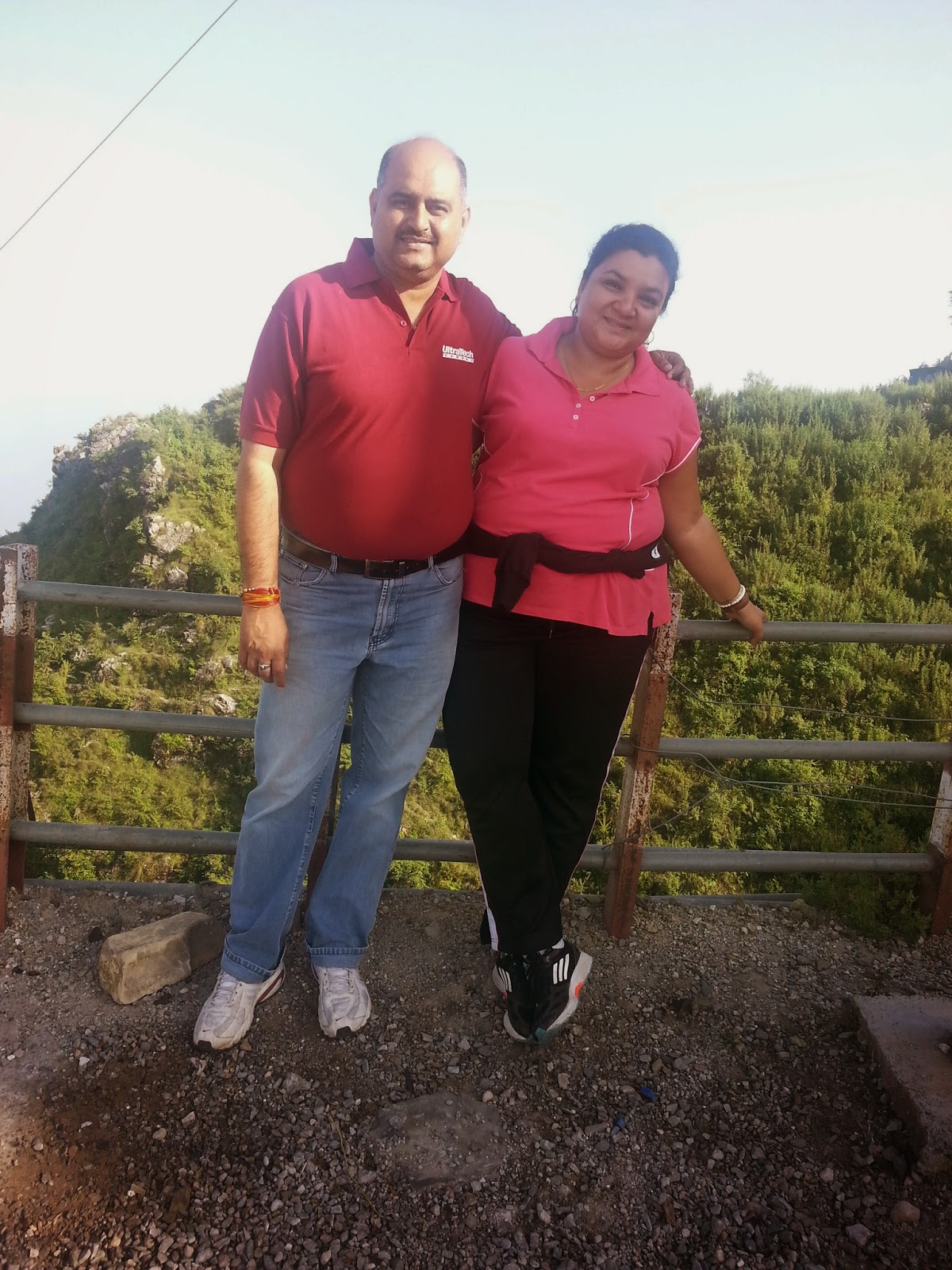 It had a slope of considerable gradient.  We had to bent our bodies ar 45 degrees to walk uphill. I could feel my heart beat loudly.

I recalled what Tara, one mountaineer who was with us for the idiscoveri  training, had told me... mountaineering is all about mind over body. If you feel tired rest a while,  then proceed... remember the mountain is all the things you have to defeat in life... if you let the mountain win you will loose in life also.

He could not write properly but while we were climbing he was going up and down repeatedly. Many gave up and sat down but he kept on yelling me to go on cajoling... scolding... endearing... comforting.. taunting.. I made it to the top. You know he could barely write!!! A young skinny pahadi man of about 18. He was with us and carrying in his bagpack all our picnic stuff. 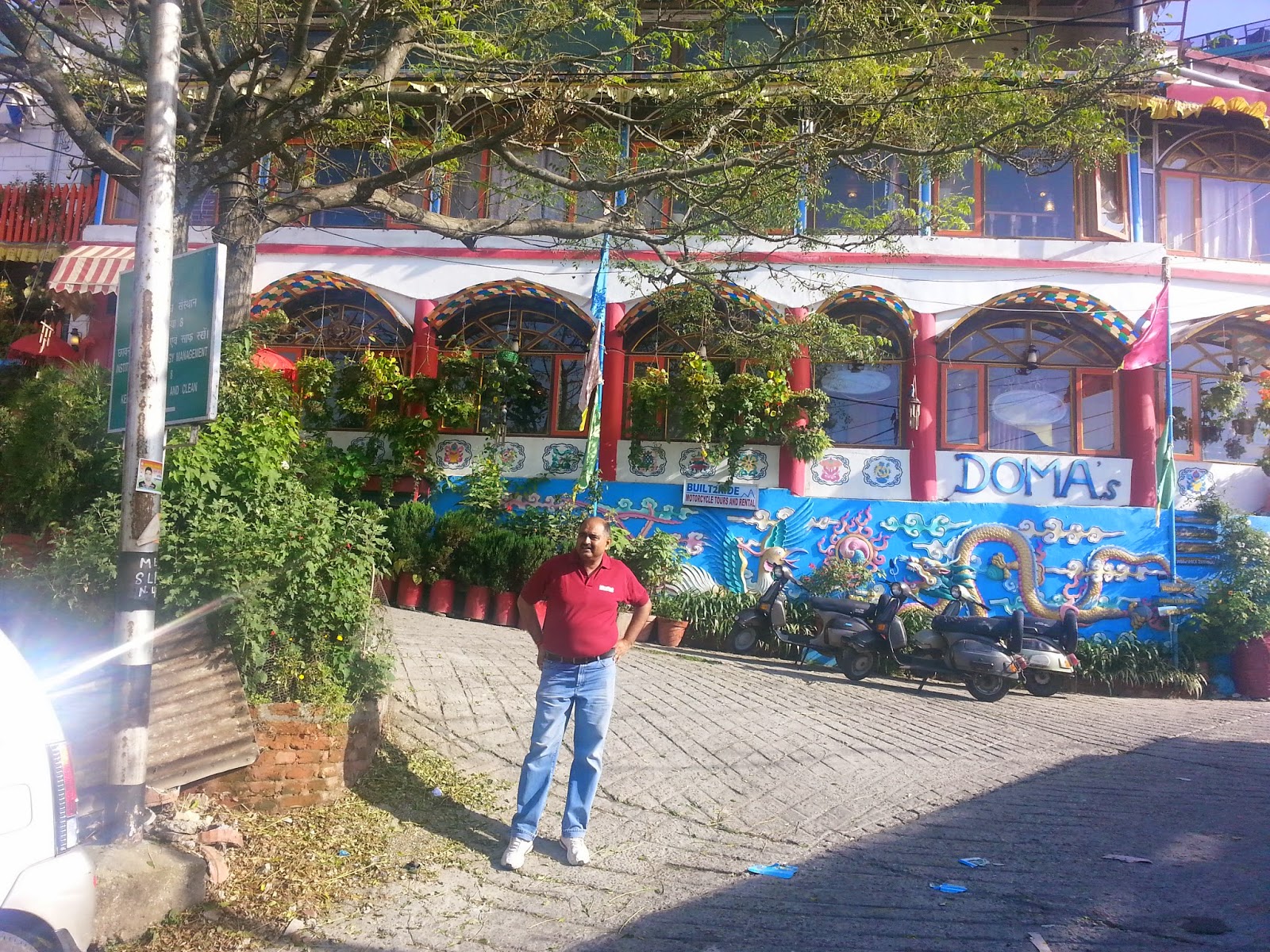 Poor Partha was walking with a big handicap ... me... I remembered Tara's words and walked on Partha was equally insistent that I reach "char dukan". We took many  pictures on the way .. and finally reached our destination of about 45 min. Which navigator had told about 10 min. The slope started in the last one km.
We reached "char dukan".

There is a school called Woodstock there and we saw a few.students from that school in Char Dukan. They were foreigners. 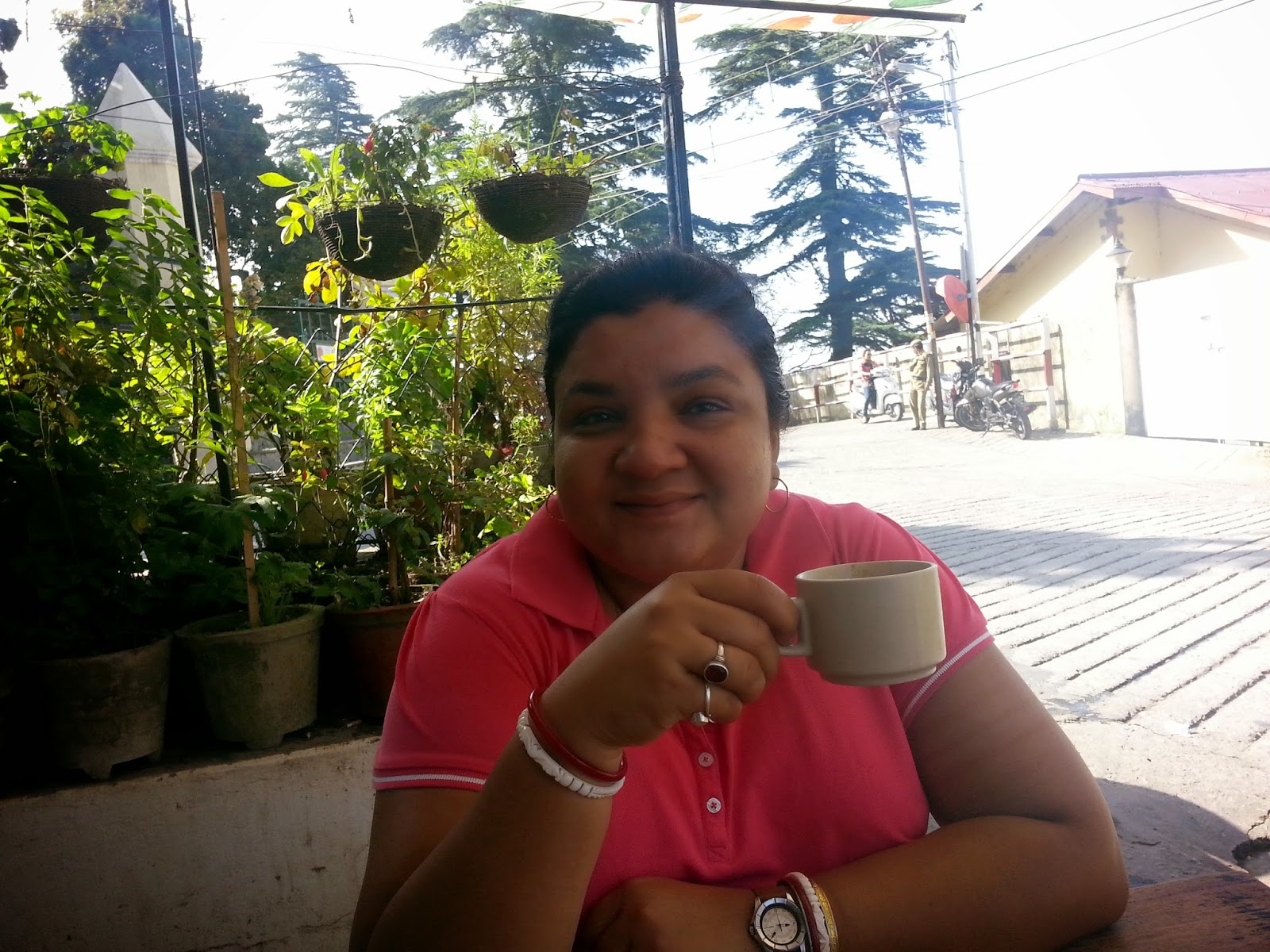 Also there was a motor biking gang of Harley Davidson Bikes which had crossed while I wes huffing and puffing on my way to the top. I HAD a bun and omlette. Partha had veg sandwiches.

If you do go there remember to try Tip top restaurant at char dukan, it is great. There are pics of Sachin Tendulkar in that shop. I have posted the pic on face book. I remember the times I was once in Surankot...

At tip top (since 1910) it was nice and peaceful and cool all my sweat was drying and I felt I was in heaven. Even the stray dogs were veru cute to look at. We had started at 7 30 and reached back at 10 15.

Downhill was easy but because of my knees I was slightly careful and cautious.  When we reached Landour market I was able to walk faster than Partha. .. who made insignificant and insulting remrarks (jokes) about the bun and omlette vis a vis my metabolism.
After reaching I had bought back a waffle for kukku but they had eaten breakfast of bread pakoda s. And the waffle was cold so it was not eaten. We started the journey back home at 11 am.
Reached d dun by 12 15 am and then had lunch at Anandam... a little like the Haldiram outlet when we  travel back from Mathura  to Delhi. There is a shop called "Raising dough" nearby, we bought back square bread from the shop and also blue berry cheese  cake...

A guy there was very pleased as I was Bengali. He was too. A final year student doing hotel management in d dun.
Came back after 2 good days. The hotel was good but the sheets appeared damp also one night before one company had held a cabaret  dancing function in the hotel audi hall and their comp employees were there. We saw skimply dresses girls  confidently and boldly walking in the hall for dancing.

Thanks for your encouraging remarks ..... when you come I would love to with you