The anniversary was very nice day and I thanked God for sending this great day my way. I share this  day with another colleague who has celebrated her 20th anniversary this year. Her son is in 12th and is a great swimmer.  He was also my student. They have taken a happy family picture with a small baby it is so funny all are laughing because of the small baby I will send you the picture.

Partha  reminded me of the leopard attacks on doonites.

I (the optimist) told him that   with our  combined weights we will be heavier than the poor carnivore and easily supress it.

Partha (the pessimist) replied that we will probably go to jail for harming a poor animal who is endangered.

I pointed out that it might be a good thing because....
We will spend some quality time with each other. With no cell phone.

P ... probably there are different jails for men and women remember we will be there for repenting.

S. .. In that case you might be in the same cell as Sallu who will be there for poaching charges.

Partha's cautious nature won and we took the same route BUT... I had told him to go in increased speed. So we burnt 314 calories at a speed of 11.43 min per km. Which was a new record for us.  Thanks to my gymming... The days puffing and panting in  Landore walks are over. Now Partha  huffs and puffs and tells me to slow down. I am more cruel than Partha because he was supportive and stopped many a time to make me catch up. I just laugh scornfully . No wonder God has not made me slim. With my beauty I would  be too vain.

In the afternoon we had Tahiri for lunch....but I had told all to eat cautiously as we had planned on a Muse dinner. It is a good restaurant here. Part of hotel Inderlok.. and their restaurant  MUSE of Inderlok   is good . Not a patch on Sayaji but ok. Their non veg section is good. Also mil loves chicken and mutton and fish. So she said she will treat us there. But when it was evening she was cold and she had a new dress which is a churidaar  an woollen kameez from Amartex .... It looks good but if you have slightly plump legs and mil has skinny legs plus plump body... when she bought it for herself I was skeptical but she insisted they were fashionable and in vogue.

But after wearing it she felt bad and after that she said we should go and that she is feeling too cold. She just made it  up as her fashn statement came to a naught. So we went.

I went to Tanishq   and bought the earrings. I liked many of them  but bought only one.

Deepa has made a scheme. She saves 5000 from salary   each month to Tanishq . . And after competing of 11 months tanishq pays the last installment . She has one daughter only so she is collecting   jewellery   for her wedding. Already she has collected 4 bangles, one earring and necklace set.last year she told me of it and said the collection are good and husband paid for the bangles along with her. ISHA her only  daughter is in 11th only.  Deepa plans to buy her a kamarband this year so she is depositing 10000 each month. She says the one she likes is about 3.5 . Poor Praveen her hubby  will  have to pay this year as well. But it is a smart thing she does because each year for the past 6 years she is buying jewellery. And she says shadi ke liye abhi bhi taiyari nahi hui hai.

We went to Allen Solley showroom and kukku and Partha bought jackets for themselves. PARTHA got ABG discount of 1500 still had to pay 8000 for the  jackets .

Then Kukku wanted to eat burgers and we went to McDonald's  and bought dinner for 350 bucks only.

Kukku had a meal I had a soft serve and egg burger. Partha had a veg burger. And Kukku had a full meal.

Mummy who was expecting food from Muse would be disappointed   with Kolkata kitchen rolls. Still ... we went there it was closed so we went to another expensive joint and bought food worth 2 people there was Sikh kebab and kathi rolls and tandoori fish.

Still I told Partha to be ready for critical  feedback. And we got just that.  The roti were like rubber. The fish was semi cooked and there was no chicken in the Kathi   rolls.

Well life is like that.  However the day of surprises was not over Partha had bought chocolates which I could ill afford to eat. Still I had 3 blocks. It is caramel Dairy milk silk and was super yummy but very sweet. When you stop eating refined sugar all sweets appear toooo sweet.

Kukku had made a card. 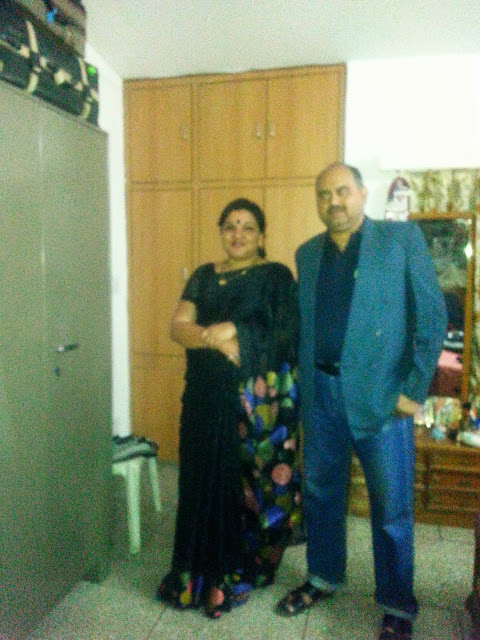