A few days that Goles had come home was a tech free week. The following things happened. They were not necessarily connected.

1. Manoj left our house for good and we got new tenants.  Guess who they are? ? Two ayurveda doctors who run a fat loss centre. They have a pact signed with an American company which produces nutrients to be mixed with water and drunk. Partha had gone to hand over the keys to them and they fed Partha and Umesh bhaiya what was "breakfast". A glass of water with nutrients.

Umesh bhaiya has published published a poem book called Spandan. Which is full of "haiku". These poems are 3 lines long. Each line has an independent meaning but together they make full meaning. He wants us to come and listen to his book release. On 22nd March. But Kukku has his exams.

Their daughter is in the teen scream stage and the parents especially the mom are very upset.  RADHIKA the daughter stays in the bathroom for a long time.. she argues ... she screams at her mother all the time

Partha had gone this Sunday 9th to hand over the keys and had a glass of breakfast. Partha also talked to the contractor about denting and painting and a few more corrections. Termites have been playing havoc in our house as bapi is no longer there.  He used to put drops of some poison to kill them. 1.5 lac.

2. Kukku's final exams began. He is having it from the 10th to the 24th as a result he won't be able to go for the book release. It is sad. As we would have had fun.

Also Goles had come here for holi and we had great deal of fun. But we had booked my reservation to go with Goles in january to go to her hostel. As a result we prepared the syllabus of kukku well in advance so that he could study on his own as he had his test in that time only.

3. Holi. ... we stay with the golden oldies who instead of enjoying colours of holi were more keen to be safe from colour allergy and swine flu. However all 3 of us played on the roof. We had a pickari.. which was held by the sniper. And 3 balloons were used as missiles. Kukku and Goles who had filled them up painstakingly was sad to see them go do soon. He called them the
1. Successful balloons.  Anyone who has filled water in balloons knows what it means... but he has used the term for the 1st time.
2. Innocent balloons when we were trying to burst them.
3. Sad balloons which no one wanted as they were too small. And we're selected for the end for hitting purposes. Also they refused to burst. We had to use force to cracking them. I loved these adjectives.

3.Gym Valentine.  My gym Valentine is very fond of me and calls me daily she did call me also when I was in Delhi and as a result I have someone to go with these days.

4. Delhi trip:- Goles and I left for her hostel on the 9th evening when Partha came back from hdwar. We went in Mussorie  express and had adjoining middle berths. We were talking and discussing the best ways to get Jeans for Goles. We decided on lajpat Nagar which had All. We did not go there but one man (lb under Goles) told us to get off at Old Delhi and catch the metro to Lajpat Nagar.  He said he could not help overhearing our conversation and that his friends daughter is also in Amity. She turned out to be Goles classmate. He made us talk to Pihu also.
Then we slept. In the morning I requested Goles to go to mohan singh place in CP. As there are cheap and best jeans. Well so she agreed and he told us the way to there also. I got up. Brushed and pissed. Woke up Giles and we're ready and got off . Sadly I had on my sandals and not shoes they would have helped walking. Anyway. We took tickets for metro. The man got off with us and after directing us melted in the crowd. He had come like the pole star and showed us the way. In the train it was sooooo crowded that I did not get up. We had luggage  and 2 bags. We went out of the station (old Delhi metro station). And had to walk a lot. There were no auto no buses and no rickshaws were willing to take us to Mohan Singh place. Finally again in the old Delhi station we tool a taxi and that took us to Mohan Singh place.250 bucks.

I went to Hanuman mandir. Then we saw a jeans shop open and the man took Goles measurement. He asked us to be there by 1 pm. That time it was 10 30 am.

We went to ICH and had rock hard idlis. .insipid sambar. . Strong coffee. The ambiance was good though a few students... a few kids of a club came to discuss a facility.

There was wind blowing through our hair. Gentle sunlight caressed our  cold skin. Camiraderoe and frolic set our hearts at peace. It was good.

There after we went down. Breakfast had created pressure.  The bangis downstairs were  cleaning the loos. . I saw a hygienic loo... not 5 star stuff.. but had running water I did my stuff and urged Goles to do it to. She had a skin tight jeans on and had to do mean acrobatics.
1. Remove one leg from Jean.
2.Sit.
3.Do the stuff..
4. put the leg back in.

It was no easy feat.. as our sizes are no secret and public loos...but she did it and we were well fed and fresh.

We did a lot of windows shopping. Goles went to Mark and Spencer to try on bras. She did... but liked none.. after which we wandered lonely as a cloud. It was very nice. I had the "dil dhoondta hai phir wohi. ..." moment and Goles saw CP a through my eyes. We had a very great time and spend not a cent.

At 1 15 the man called us and we went to collect the jeans. They were done beautifully and also had the ":levi's" label!!!!

We had lunch at Mac Donalds and there I was greeted with a squeeling girl  .. who said ma'aaaaam. Another VDJS girl called Kanika. She greeted me so happily and made her friend meet me. I was very touched.  She us now in South EX designing kitchen for a Germany company. She was a very average girl. That makes me believe there is a place for everyone in this world we should be patient enough to find it. I said I was so proud of her. She was lookin good ... which she was.

We then talked to Vinni didi who said her nanad had come  we can come and we will adjust. But I sensed stress in her tone and Goles suggested we could ask Mr. Doval to allow me to stay in the guest room there.

We left for Amity. GOLES submitted her gate pass. I talked to her teachers. They said she is a great girl but should stay with her type of people. She is much smarter than the gang she goes around with.

GOLES  told me that in their gang one boy is not talking to her in particular.... and all her gang has shifted to Kishore's side... the adversary. ... She had asked him herself and asked many other to ask him what the matter was but he did not tell.  He says there is no matter but he does not involve her and all the gang though they talk to her they prefer the company of Kishore. Naturally she is very hurt. Also her fat.. I felt very bad for her.

Last time I was there kishore Amit Alex Nishant and Malini were with us constantly. But I was very happy when we did encounter them I was at the ATM. She asked all to come and say hello to me but Kishore.... I felt tears of happiness. These are the lessons that hostel teaches us.....I was feeling bad for her and suddenly I felt bad for Kishore. Poor boy to be publicly ignored like that !!!!

We spoke to MR DOVAL AND used strong terms like abla nari. .. who said I could use the guest room for a day for 2000 bucks. I was shocked. Then he said. If you don't mind sharing the washroom you can use another room 500 bucks..I okay ed.  It was as good as the 2000 Rs room as there were no one sharing with me. I felt like the dancing girl of Trivago ad.

Goles and I decided to freshen up and meet again in one hour. We could not go to each others room... but by 7 we met up and walked here and there. We had dinner at the mess beneath D Block. There I met another girl Aastha who had cleared CA and was in the 2nd year MA Finance. My ex student from VDJS.
Another squealing session ensured. I feel blessed at times like that.

I got her 1 month at  persona the Amity Gym. But she is intimidated as there are guys and girls with hot bodies doing work out all the time. She says she will go there though. Also she has said she  has eaten good food today. We stayed together till 10 pm. And walked and walked.  My cardio gave me a high 5 for walking 18600 steps.  I walk like this only but today I had my phone with me.

In the morning we met up by 9 15. She had called her teachers and persuaded to give her proxy as she was having a last few moments with me. Her teacher allowed. So we stayed together till 10 am. She left me at gate 4. I felt sad to see her go.. but hostel is good for her she is tougher and stronger than before. I hope she looses weight as well.

I took shared auto till golf course Noida. There after called pickles from Patel Nagar. She said to come in rickshaw as Pritha was about to come. I came and saw that there was sprite... sweets.... for snacks.
Lunch was ...rice fish daal chutney (2 types ) spring onion veg. Really poor Picklu must have been cooking from the time she heard I was coming. After lunch I took rickshaw and boarded metro and came to station amd caught the train with 40 min to go. 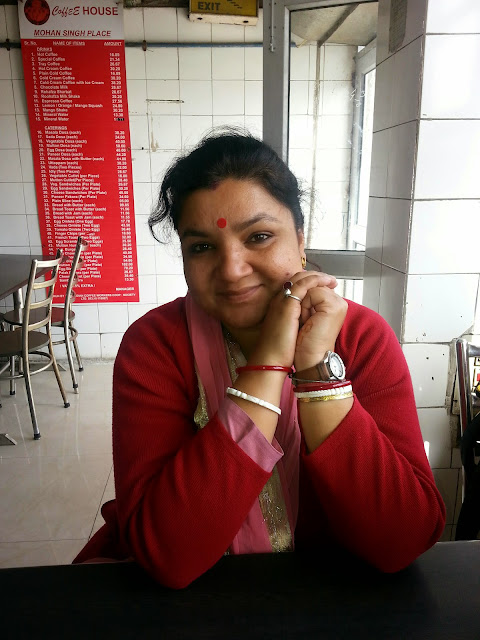 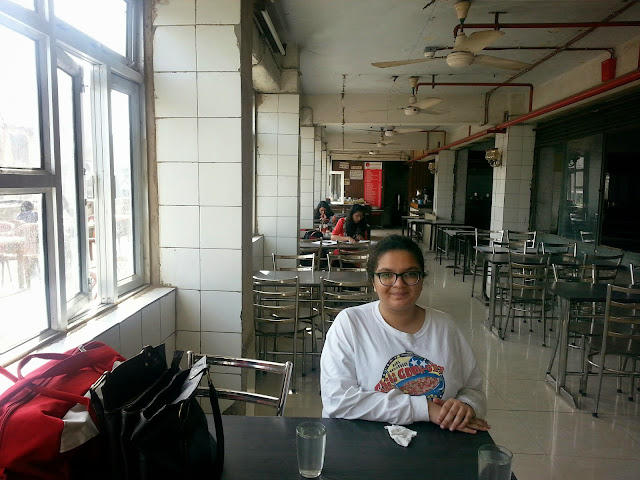 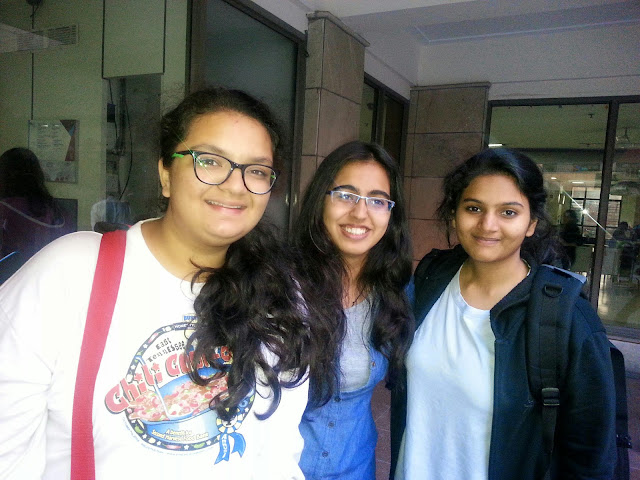 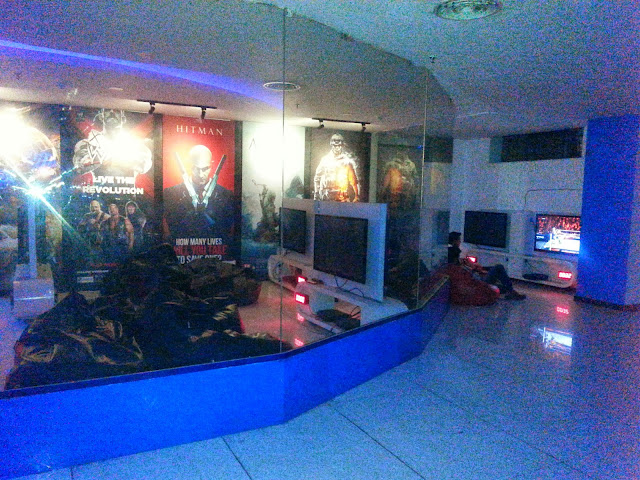